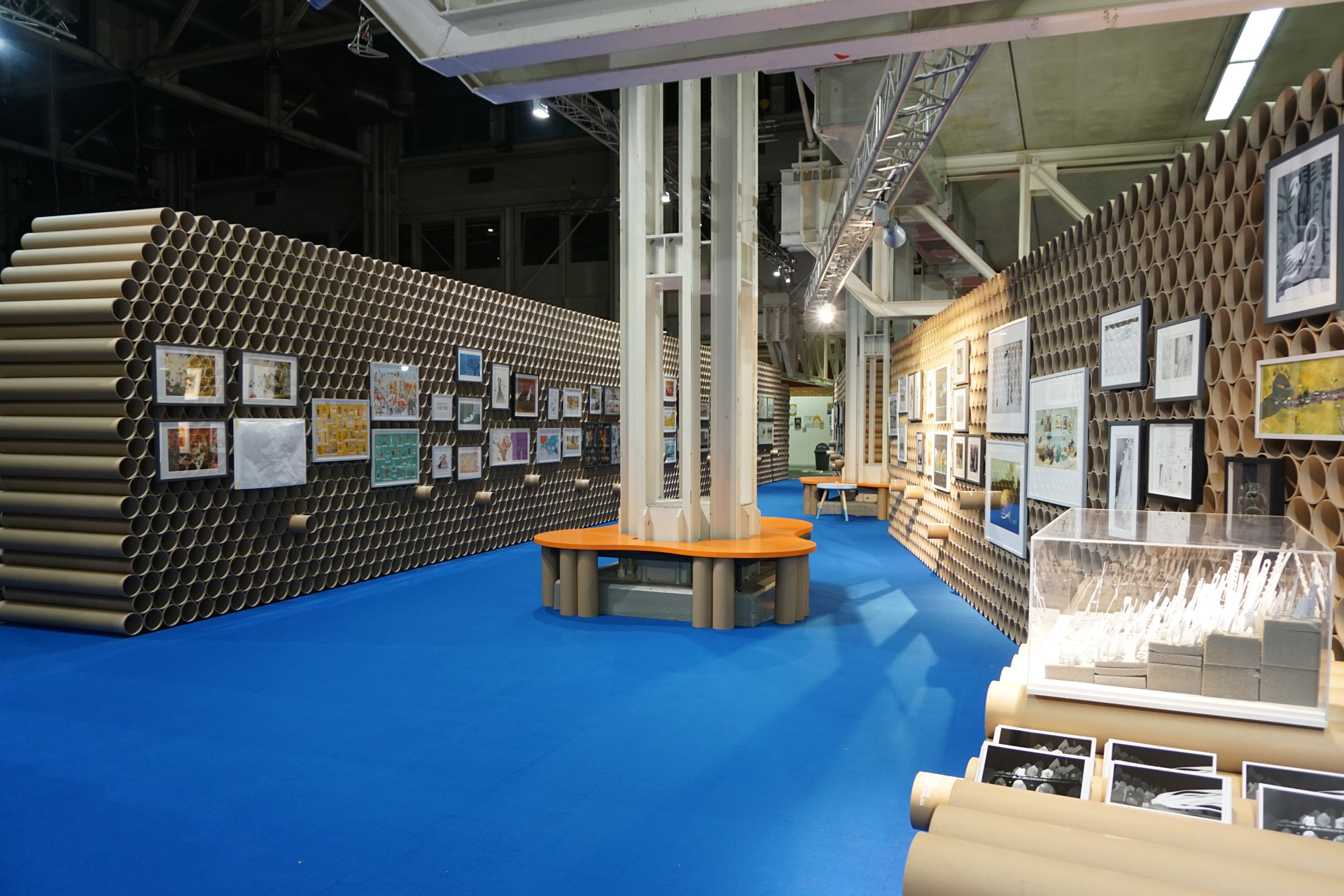 „Look!“ was the affirmative slogan with which Germany presented itself as „Guest of Honor“ at the Bologna Children’s Book Fair in 2016. Every year in April, Bologna is the top international meeting place for illustrators and publishers of children and teen books. At the heart of the German representation was an exhibition of unique original works from 30 German illustrators. The featured art pieces were complemented by an extensive book collection showcasing the published work of 55 internationally acclaimed illustrators. 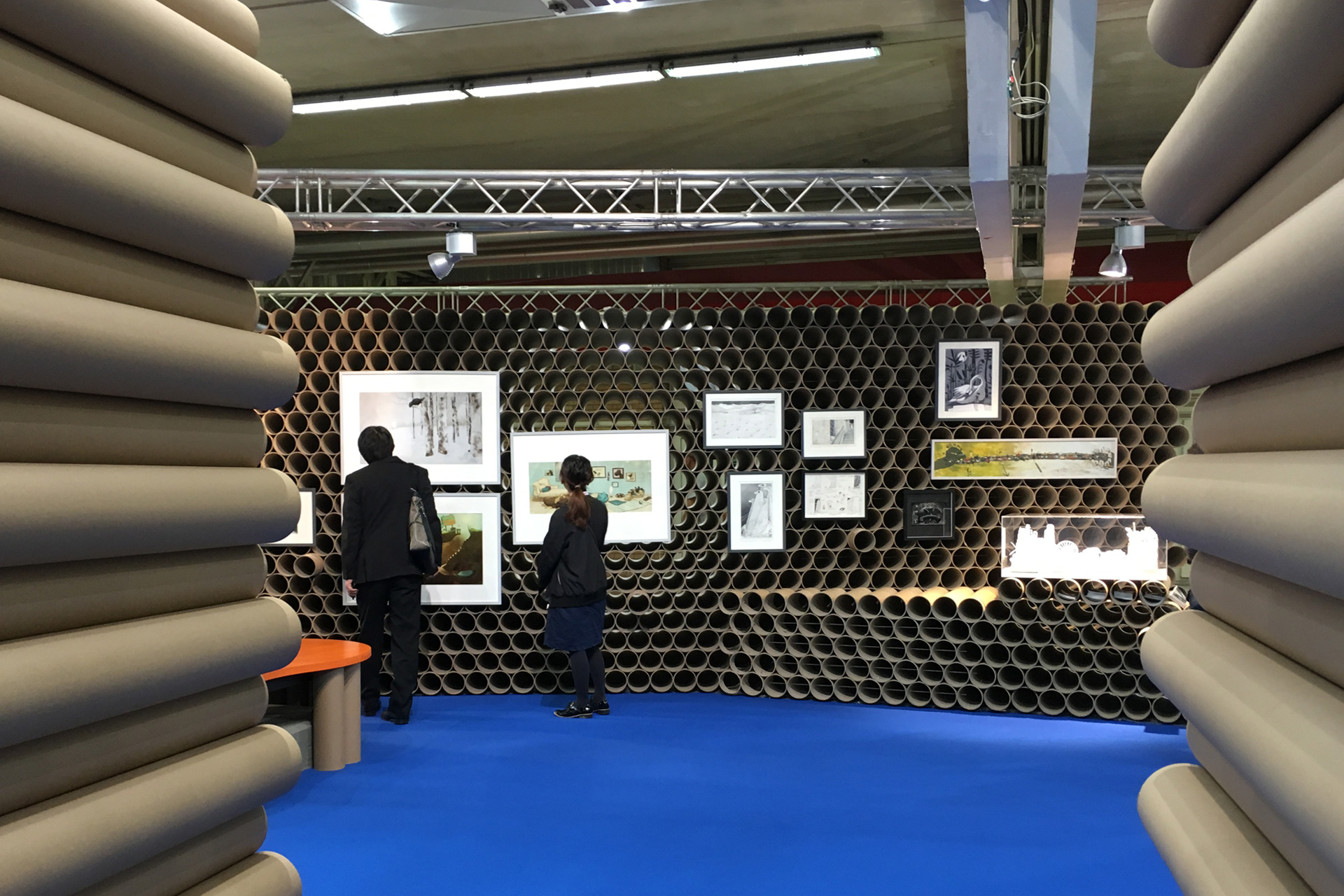 The Exhibition as Show Machine

Scheßl/Weismüller’s innovative design, the “Show Machine”, involved 7634 cardboard tubes creating the constructive basis of the exhibition design and build. The eclectic layering formed a canyon-inspired valley. This interior space served as a congregated „showroom“ , tucked away from the busy trade fair. Though, the smart concept engaging cardboard “telescopes” also allowed a “Look Through”, that is a peek through a window from the inner to the outer space and vice versa. At the same time, the cardboard tubes were also put to traditional use as package material utilized by artists for sketching, drawing, and illustrating.

In addition to the exhibited works of professional illustrators, the visitors were able to browse the displayed book collection, admire the exhibits, and even contribute to the exhibition themselves at so-called „Blob-Stations“. Round tables equipped with „blob paper sheets“ and pens encouraged visitors to trust their own ingenuity to edge in their own sketches. The resulting creative sheets were hung up and displayed on the outside cardboard wall of the exhibition. 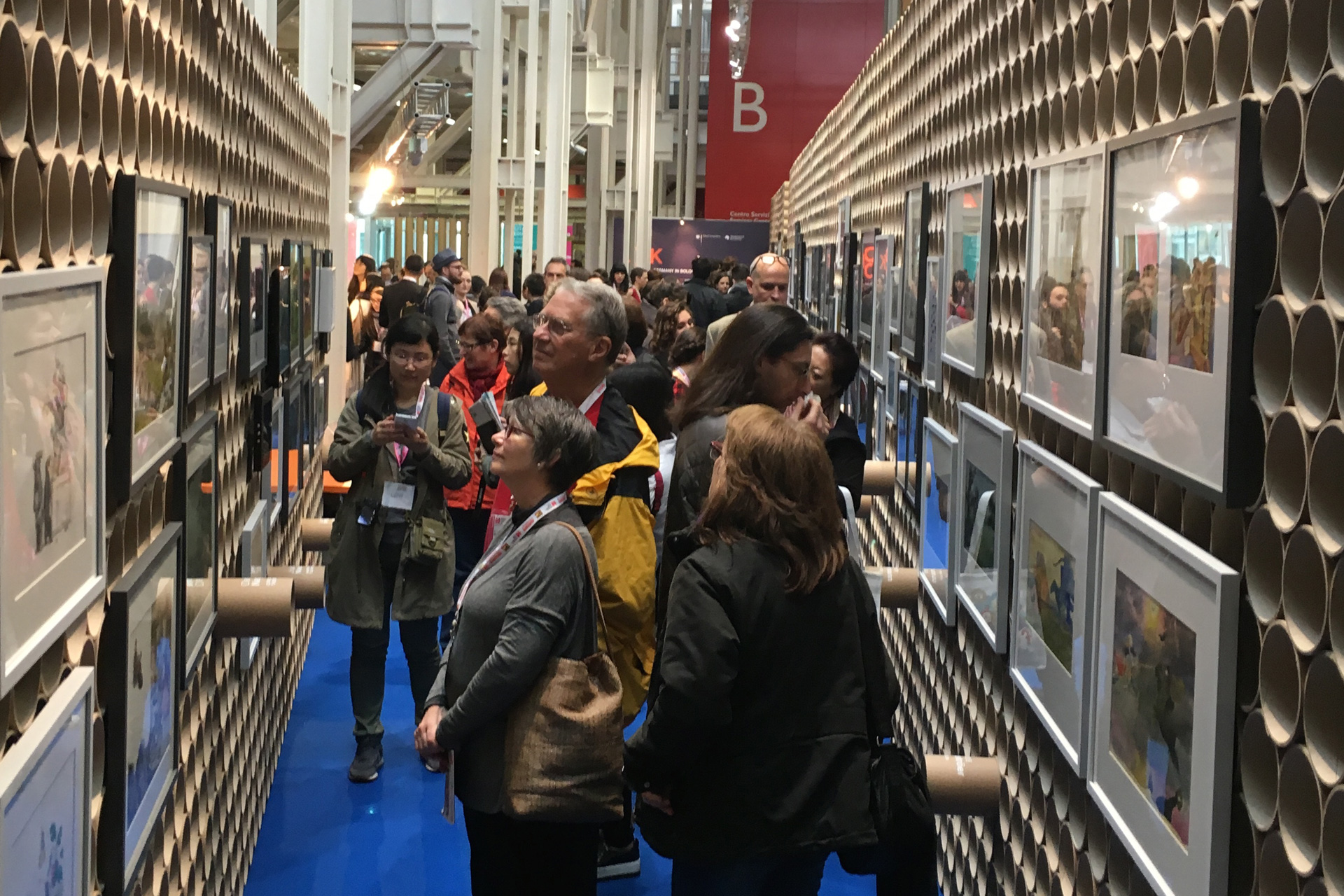 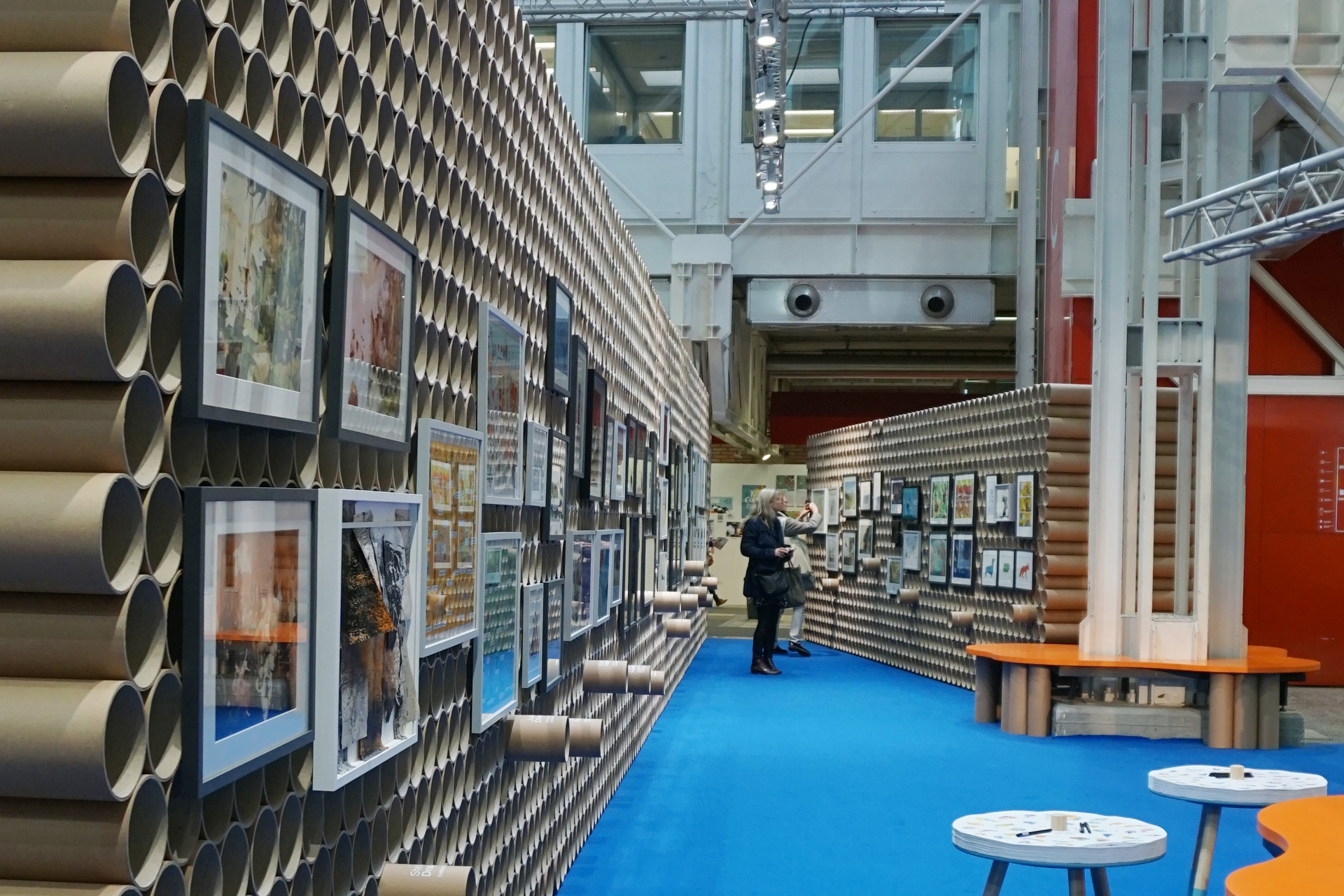 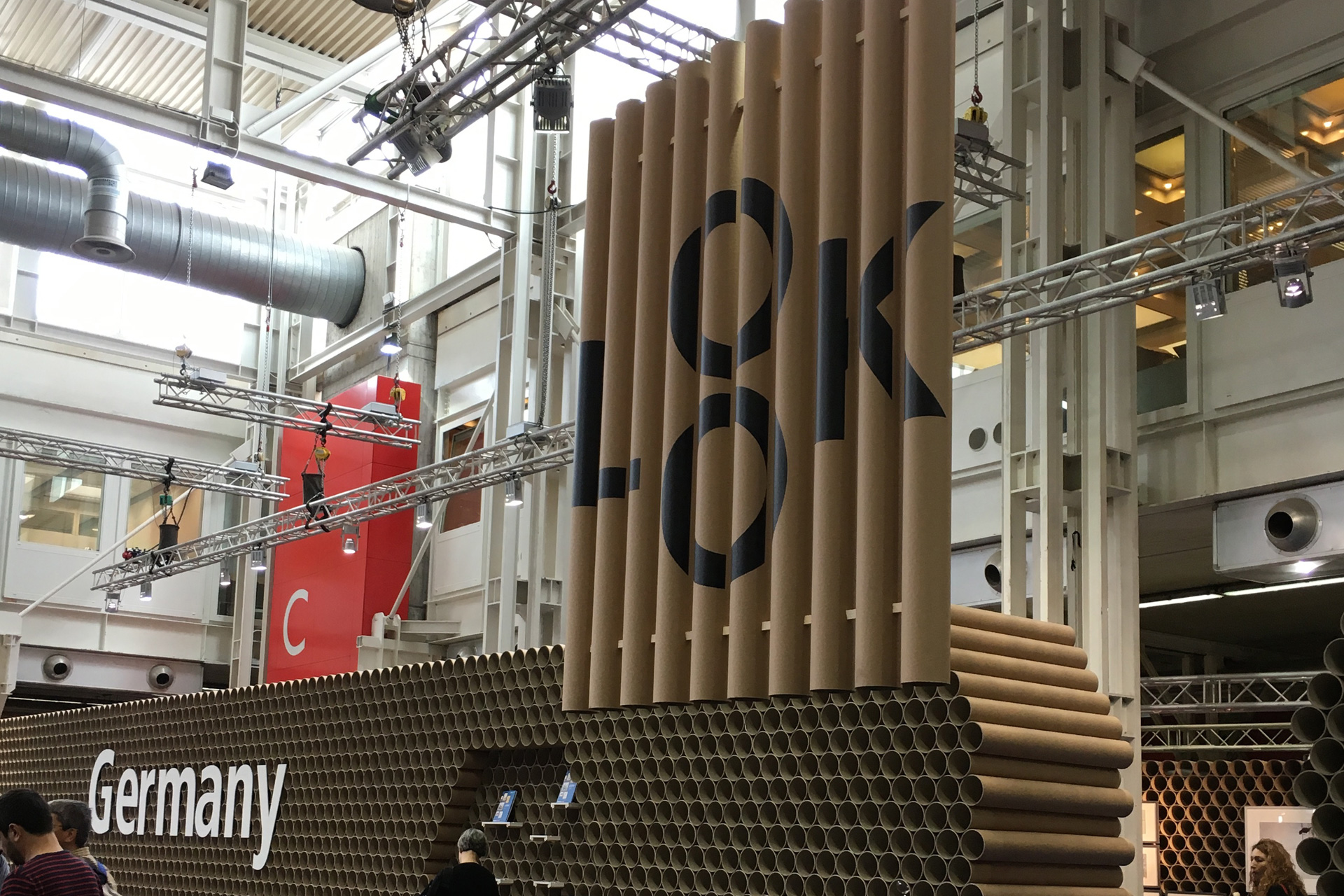 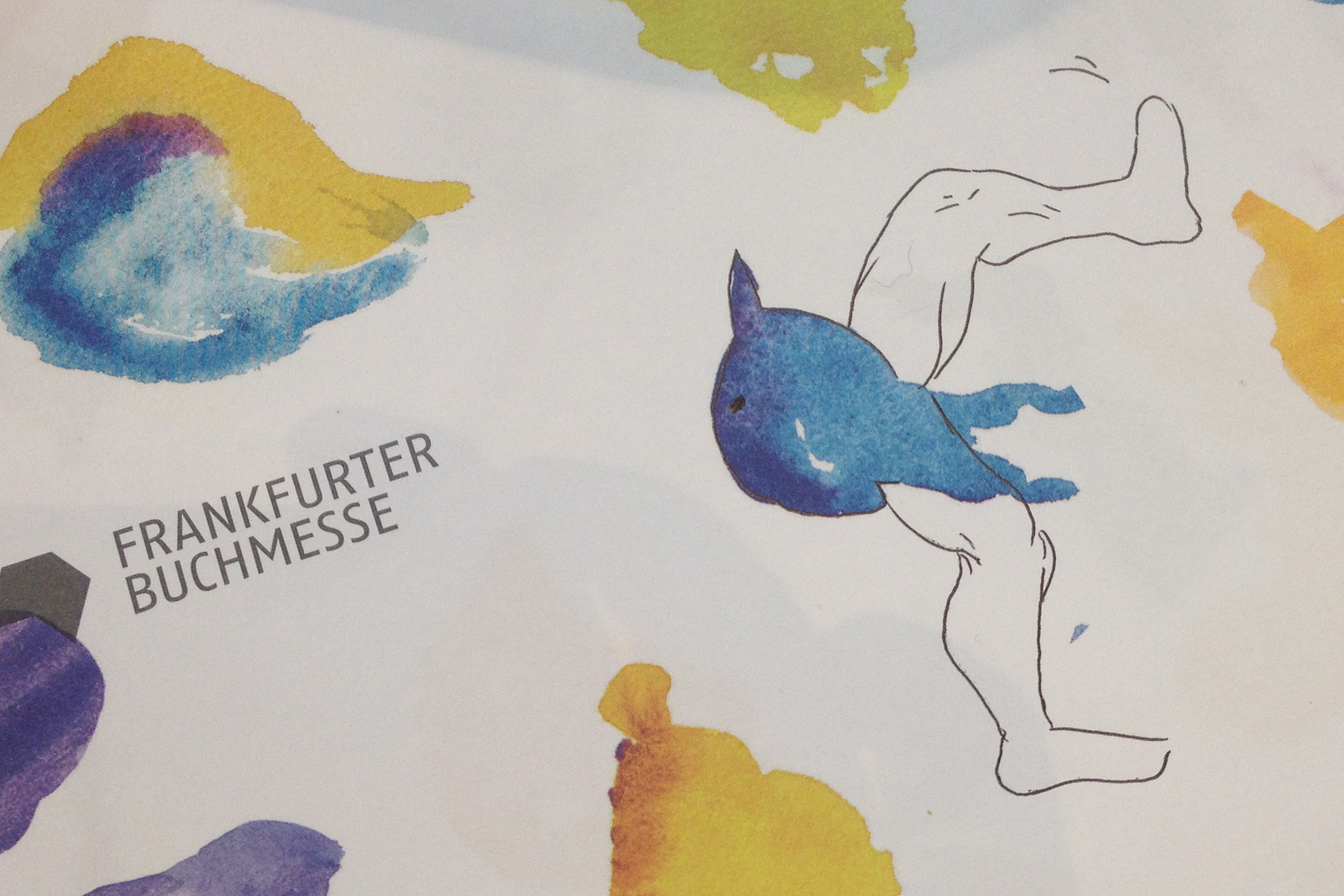 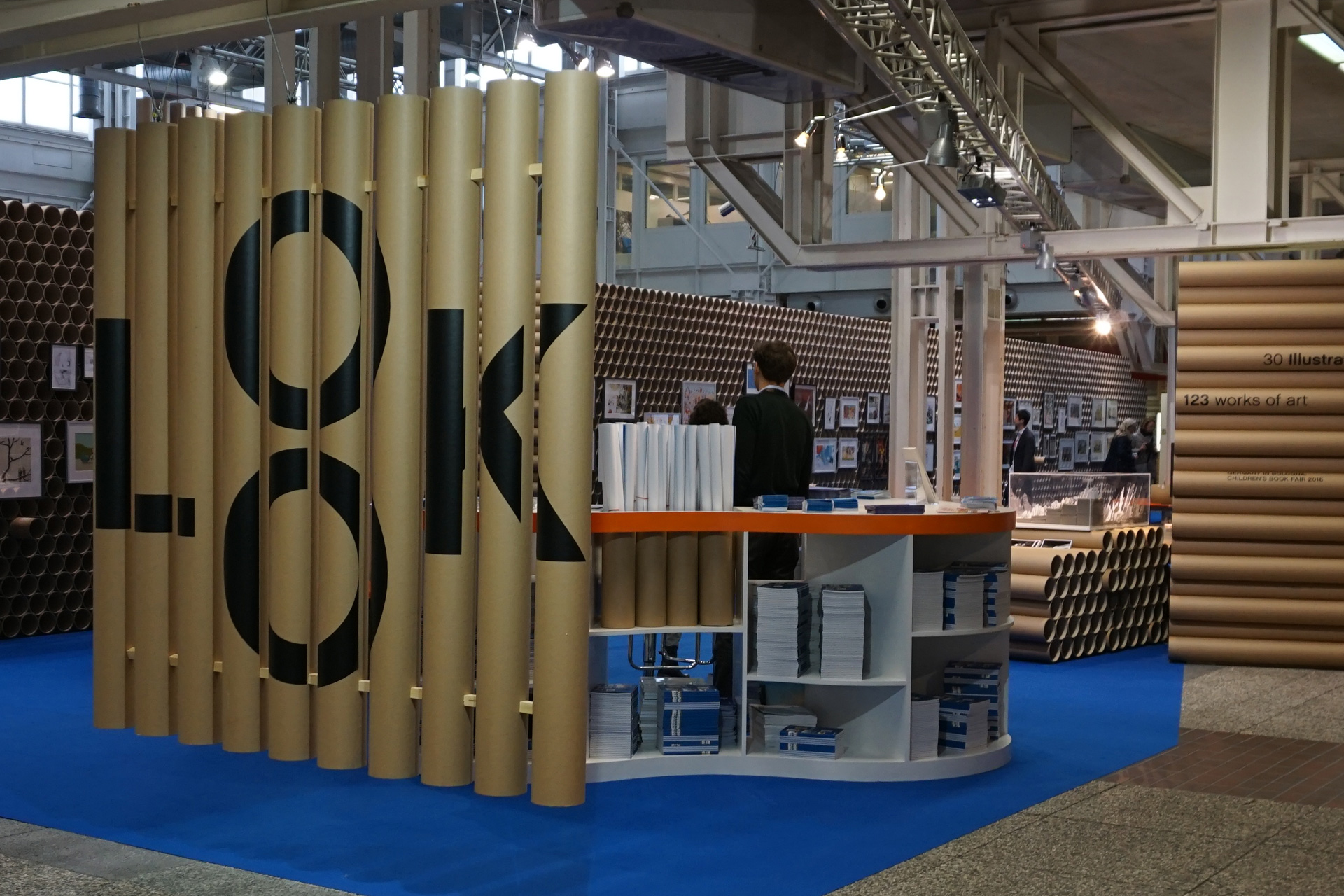 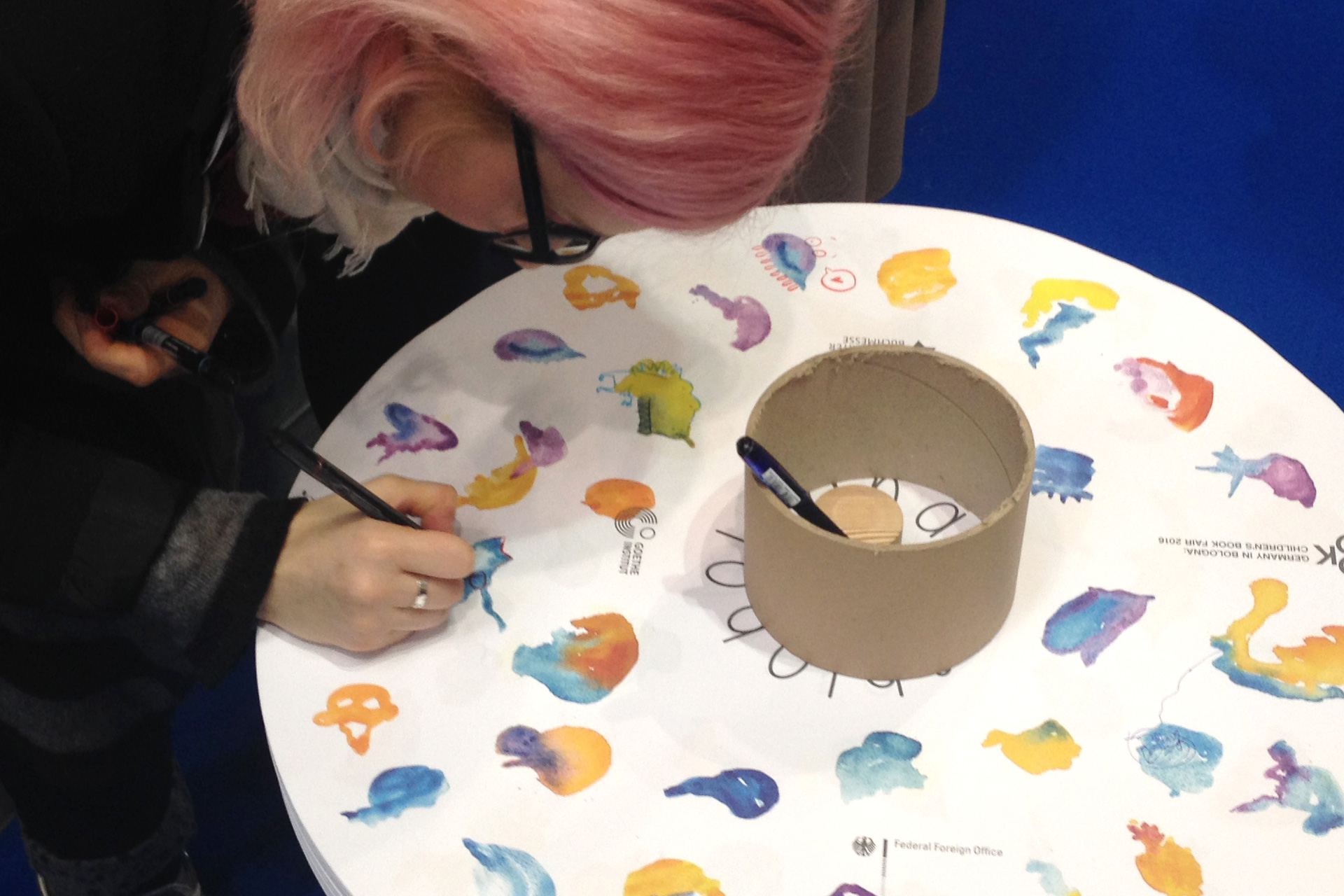 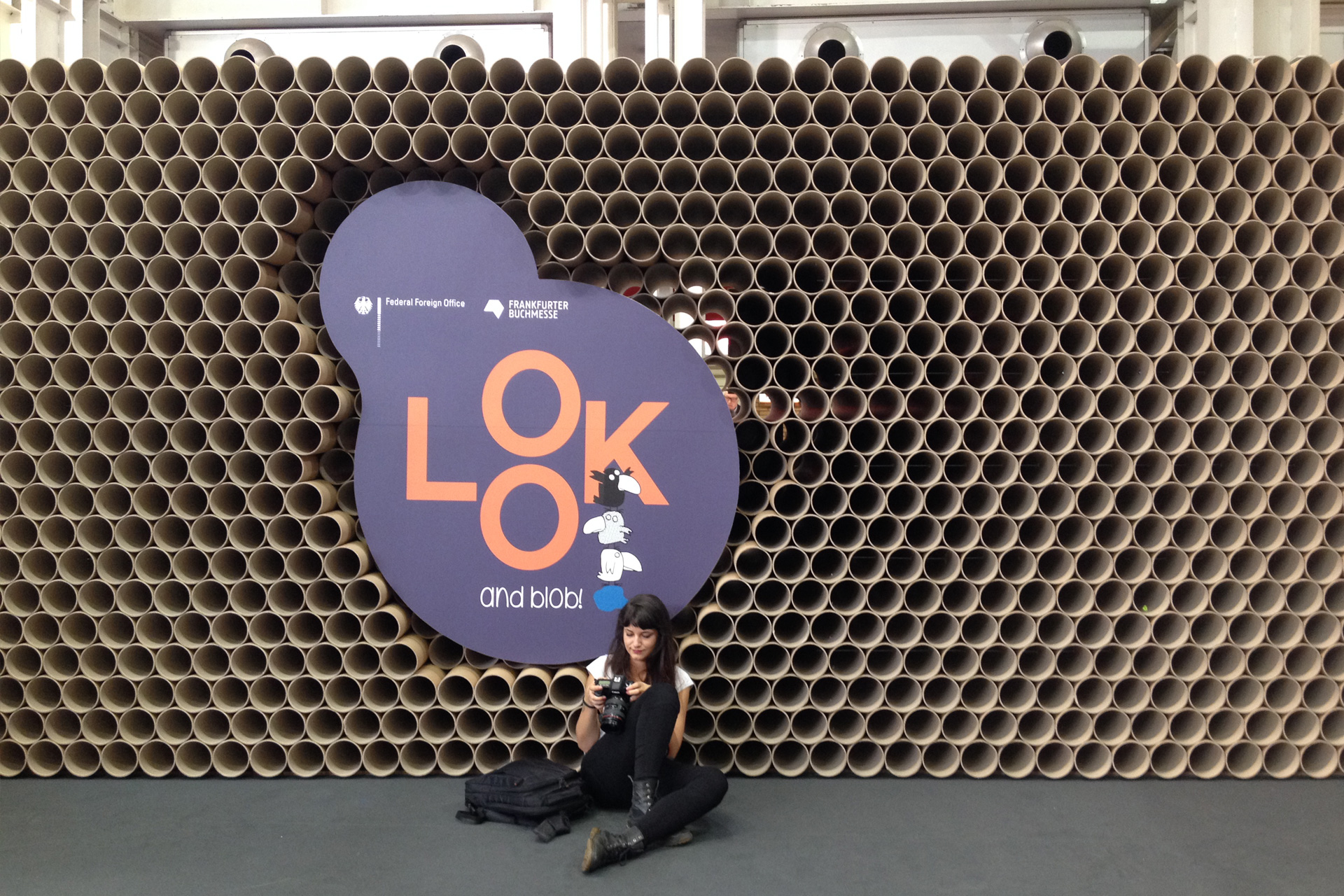 The „Look“ logo design was a collaborative work of Ole Könnecke and Scheßl/Weismüller. The typography is reminiscent to the cardboard roles, and the direction of architecture was accompanied by little birds which in style and form are signature Ole Könnecke works. Typography and birds were changing their positions in a playful way, which was also reflected in the way they were integrated in numerous media, such as invitation cards, posters, websites and on site. 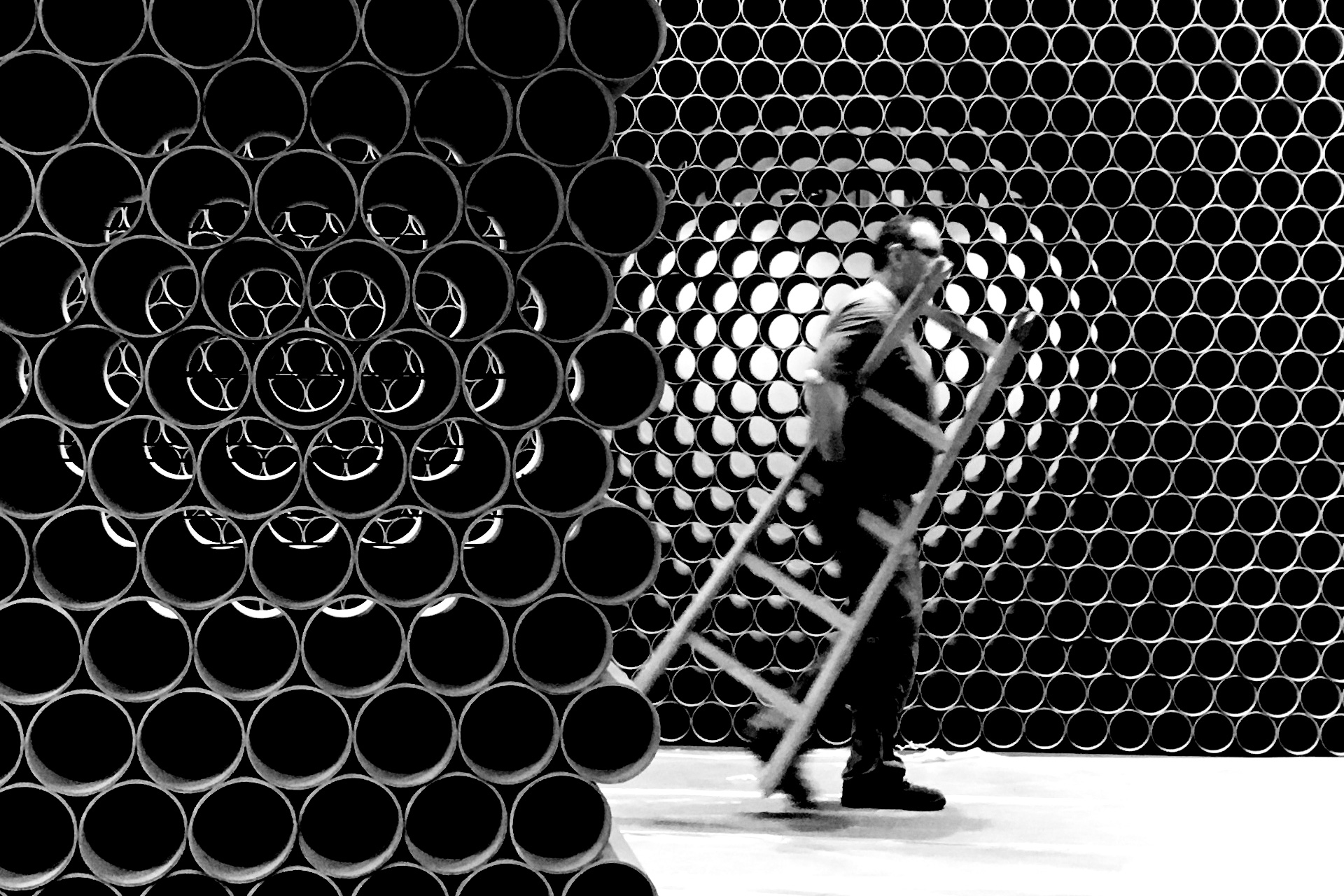 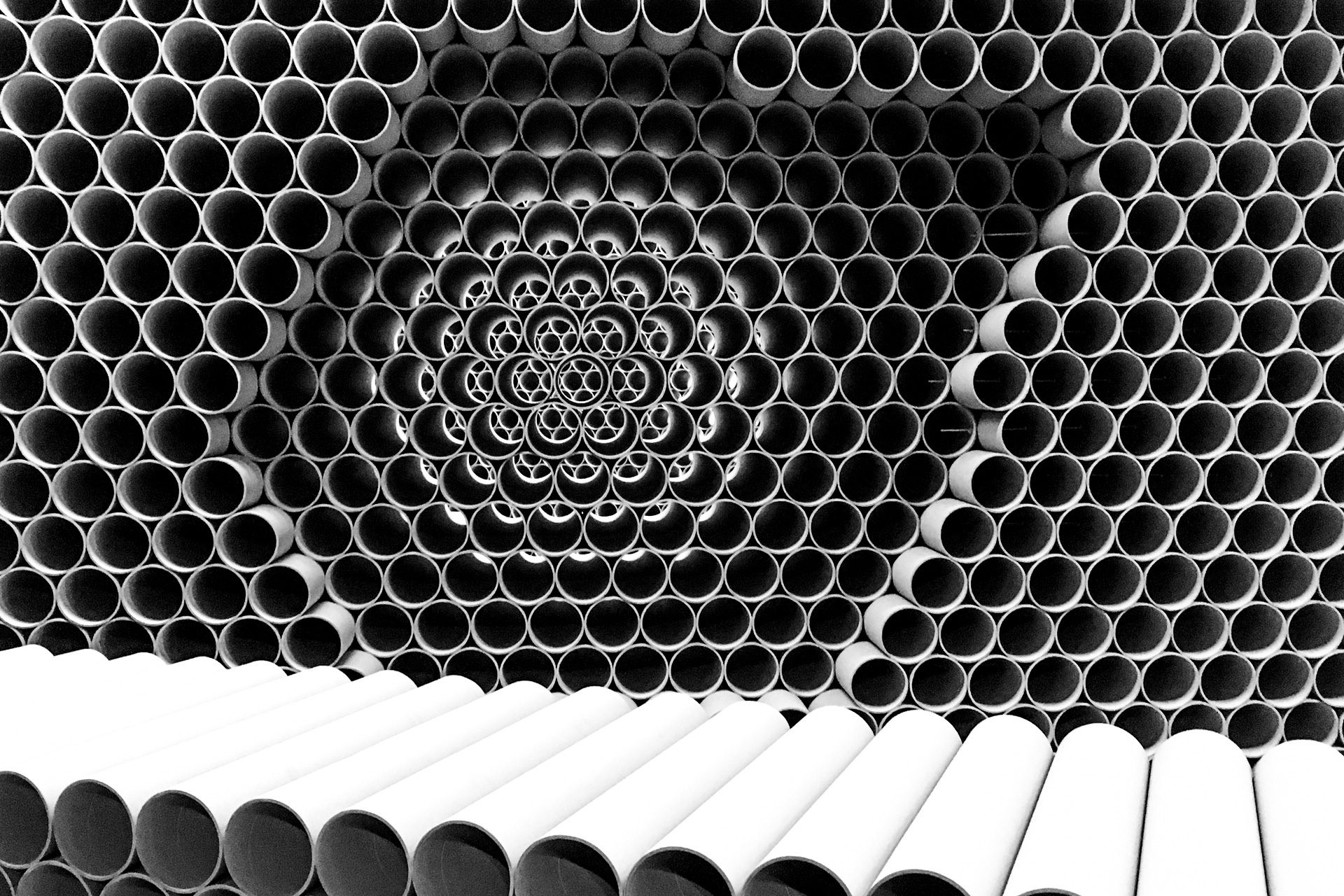 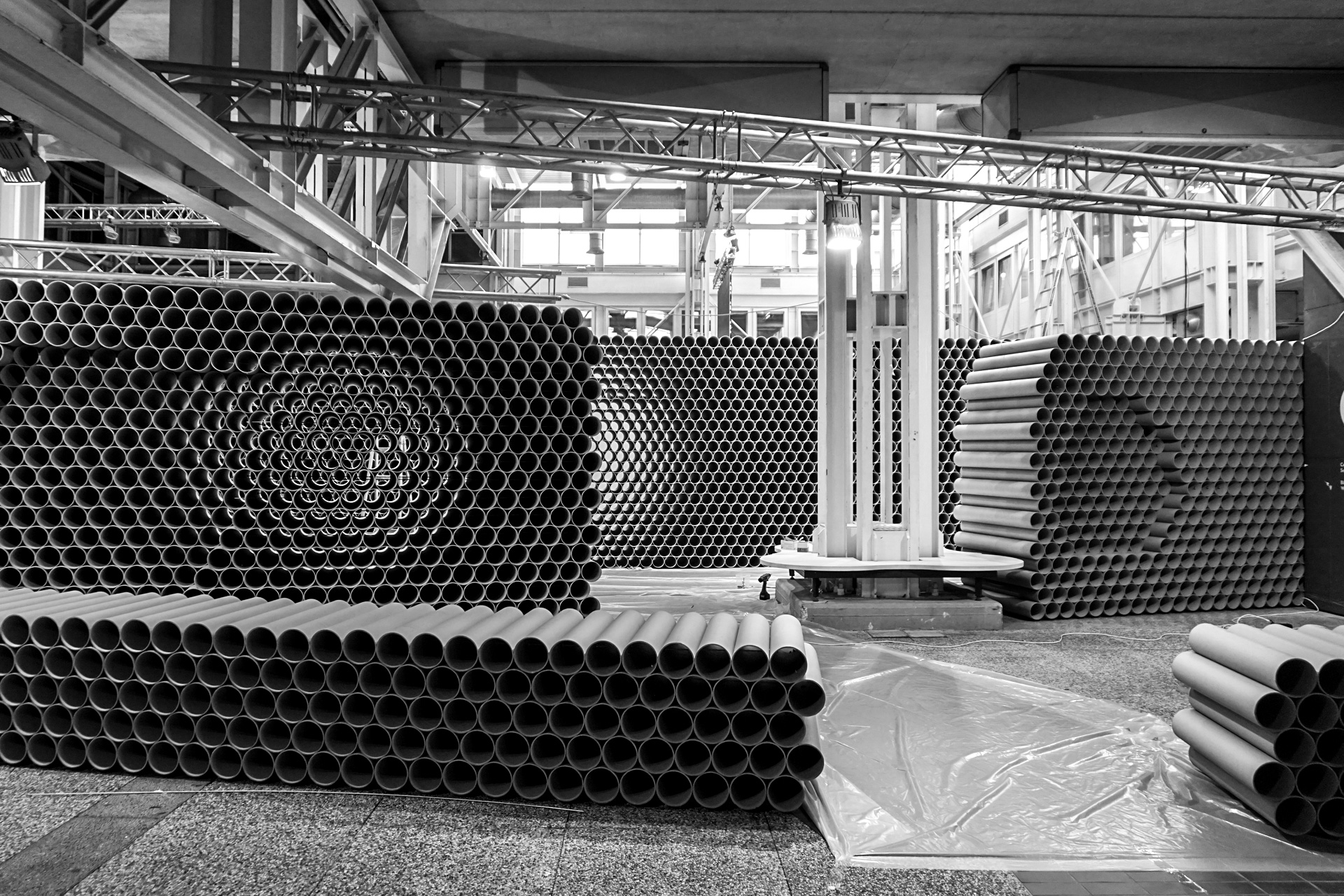